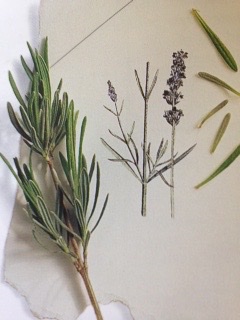 Three different lavenders are processed commercially into Lavender Essential Oil.There are something like 450 different varieties of lavender, in 50 categories, scattered around the world. All have perfume.

Some lavenders like cool moist climates, some hot and steamy.  All are excellent burn remedies. Make sure your lavender essential is 100% water processed.

Lavender is an amazing plant. We left a gigantic lavender plant at our house when we moved. I considered digging it up and taking it with us, but at 10 feet in diameter!!, I thought it was better to leave it there where it thrived.

I always have some lavender essential oil near my kitchen and in my 1st aid kit. It is not recommended to directly touch any essential oil, but to always mix it with a carrier, such as water or a natural oil, such as olive oil, coconut oil.

Three Lavenders are grown for commercial Lavender Essential Oil use.

Each lavender has a different medicinal use and distinct perfume. Remember, any lavender is an excellent burn remedy.

True Lavender on a commercial scale is mostly grown in Bulgaria, with some in France. Our Lavender is from Bulgaria, which is of the highest perfume quality. It's herbal and flowery notes, with hints of sweetness all combine to make an exquisite pleasing aroma that floats through the air like a fresh bouquet of flowers. We have been using this lavender essential  since we started making soap in 1999.

Sometimes the oil has, what I call a greener smell to it, which is due to that years weather conditions.

I don't have a lot of experience with Spike Lavender Essential Oil. It is a wild variety, native to France and Spain. It is a light delicate perfume that was used for many "pains in the head". Smelling any lavender, is a nice mind relaxer. Many people use it to help them sleep.

Lavandin is a natural hybrid grown mainly in Southern France, where the 2 parent plants grow wild, at different altitudes. French lavender essential oil is a blend of its native lavandin and true lavender. In my experience, lavandin has what I call a lemony note to it.

I helped someone, named Steve, deal with a bad burn at the FingerLakes GrassRoots Festival one year. Steve was changing a propane tank in the hospitality barn, then lit the fryer, when it puffed out into his face, giving him a bad burn. The fire department first aid tent gave him an antibiotic ointment to apply. He could either apply that himself, or go to the hospital. It was late on GrassRoots Sunday Afternoon. The festival was almost over, so Steve chose to stay on the festival site instead of ending his GrassRoots in the hospital where they were just going to apply the same cream he was already applying.

I saw Steve sitting on a couch quietly behind the Grandstand stage, in the sound guy greenroom. Being sensitive to peoples physical states, I saw that his face was burned right away. He's a very pale person, with red hair. His face was very red, and the skin on his nose was beginning to spread and crack open. The cream glistened. I asked what happened and if he was alright. He explained how he got the burn and what the first aid folks suggested he do, which was to apply the cream and wait.

I asked if he would like my help. He was very open to anything, since it hurt. Here's my burn remedy potion:

1 cup clean cool plain water in a clean cool cup or glass. Luckily, at the end of another wild GrassRoots Fest., we had a clean paper cup. I got my 1st aid kit out of my car, and put 1 drop of my Bulgarian Lavender Oil in the water, and swirled it around.

I always have clean cotton swabs in my 1st aid kit, too. I gently washed off the antibiotic cream and dabbed dry his face, with a clean paper towel. Cotton is much better, but good luck finding a clean cotton towel at the end of a music festival. I took a clean cotton swab and dipped it in the lavender water solution and gently dabbed it all over his face, carefully and gently dabbing up drips and avoiding his eyes and mouth. I did this every 30 minutes for several hours. In between dabbing, I asked him to sit quietly and enjoy the music, but not to get up and move around a lot. Also, please don't eat, smoke, or touch your face at all. If you need a drink, let it be water from a clean cup.

In-between my applications, I went to see some bands, say goodbye to my beloved friends I only saw once a year, and just mill around. I was back to Steve every 30 minutes, which is the critical part. Apply this remedy every 30 minutes. After the 3rd application, the split on his nose began to close up. By the time he went home, he was still tender, but the burn was no longer on fire eating up his skin. Good.

I packed up our gear and loaded the car. Andy was finishing packing up the stage after Keith Secola and His Wild Band of Indians. We finished off the festival with a labyrinth date, said our goodbyes to the crew in the dance tent and went home.

About a week later, Andy and I went to a party in Ithaca. Steve was there. His face looked fine. He was telling his burn story. Good festival drama can last for months. He said, by the next day, he was fine.

Lavender is amazing stuff. I always have some near my kitchen and in my 1st aid kit. It is not recommended to directly touch any essential oil, but to always mix it with a carrier, such as water or a natural oil, such as olive oil, coconut oil.

We use a lot of lavender, in everything. Bar Soap, Liquid Soap Concentrate, Lip Balm, Lotion Stik, and it's in our essential oil blend in the Olive Oil Shampoo Bar Fresh Scent. We also have 100% pure Lavender Essential Oil in dropper bottles so you can make your own potions.

Do you have a business?

Click the link below to get an online shopping cart store.

receive a 15% off coupon to IthacaSoap.com

Get industry news, sales, & specials, before everyone else when you subscribe to the

How much soap money does a shower cost you? 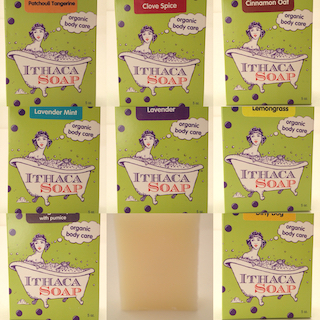 Receive a 15% off coupon to ithaca soap.com when you subscribe to The Soap Tribune.

Get industry news, sales, & specials, before everyone else.